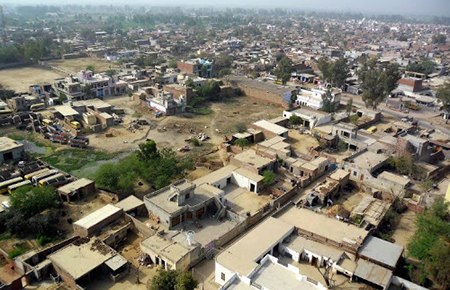 Before we start our discourse on Barnala, we should remember that there are few more towns and villages with the same name in Punjab. For instance, there is one Khara Barnala in Mansa District.  Besides, there is a Barnala Kalan and a Barnala Khurd near Nawan Shehar. Amritsar district too has a village called Barnala. However, the Barnala we will be talking about is the headquarters of a district of the same name. It is located at 30.38° N and 75.55° E on NH 71 and NH 64.

Barnala was a part of the Sangrur district until the end of 2006. On 19th November of that very year it was carved out of Sangrur to form a separate district with Barnala town as its headquarters. Although it is a small town with a total area of 26 Sq Km, it has always played an important role in the history of this region. Even now the town plays a significant role in the economic development of this area and is renowned for its textile industry. May be because of that there has been manifold increase in the population of the town in the last two decades.

According to 1991 census the total population of Barnala was just 75,430. Within a span of two decades, it has become 1,16,449. According to the census carried on in the year of 2011, the density of inhabitants per square kilo meters was 4,478.8.  In contrast, Barnala as a district has 419 persons per Sq kilometer; it is said to be the least populated district in Punjab.

Among the total number of inhabitants in Barnala town, 62,302 are males and 54,152 are females. Apart from that, the town also has a large number of migrant laborers, who come here to work in the fields and factories located in its vicinity. Moreover, the town has a high literacy rate. At 79.59%, it is much higher than national average of 72.99% and state average of 75.84%.

As we have already mentioned, Barnala is located in the center of the district at 30.38° N and 75.55° E. It has an average elevation of 227 meters (744 feet). The terrain is mostly flat and land around the town is highly fertile. Consequently, one can see farmland spread over large tracts of land all around the town. The district has two waterways running through it. To the south of Barnala runs the Kotla Canal and to the north is the Bathinda Branch of Sirhind Canal. Together they provide water to most part of the district through a network of sub-canals.

Barnala is located at the juncture of NH71 and NH 64. Among them, NH71 connects Barnala to Jalandhaer on one end and Rewari on the other. NH 64 on the other hand runs from Chandigarh to Dabwali crossing NH 71 at Barnala. Beside these two highways, Barnala is also connected with different cities of the state through a network of state and district roads.

Barnala is also connected to other parts of India through a network of rails. A number of important trains pass through Barnala Station; thereby making train journey within easy reach However, the town does not have any airport. One has to go Amritsar located at a distance 66.22 to catch a flight.

Barnala is home to number of large and medium scale industries. People from various walks of life work in these factories. Moreover, for its size, the town also has a large number of educational institutions; they also provide employment to a large section of the population. Government employment, small scale businesses as well as agriculture are other sources of livelihood for the people of Barnala.